Skip to content
Home>Twin Cities>Arne and Maud, Bing and Rosemary: The Crosby-Clooney Story at the Capri, February 13-14

Long-time musical partners Bing Crosby and Rosemary Clooney come to life again, thanks to long-time musical partners Arne Fogel and Maud Hixson. Fancy Meeting You Here: The Crosby – Clooney Story explores the pairing of two iconic musicians through the music of three classic albums, their radio series and of course, White Christmas. And who better than Fogel and Hixson to translate this story? First performed at the Schneider Theater in Bloomington in 2011 and reprised in 2014 at Chanhassan Dinner Theater, The Crosby-Clooney Story now comes to the Capri Theater’s Legends Series in north Minneapolis, February 13 (7 pm) and February 14 (3 pm). Joining Arne and Maud will be their frequent musical cohorts, the Wolverines Trio (Rick Carlson on piano, Steve Pikal on bass, Jendeen Forberg on drums).

About Arne and Maud

Maud Hixson, a St. Louis Park native, was named Best New Voice at the 2003 KBEM Winter Jazz Festival. In 2006, she was selected to participate in the famed Cabaret Conference at Yale University, opening the door to a project funded through grants from the Minnesota Arts Board—a solo cabaret show, Mickey and Maud: The Songs of Michael (Mickey) Leonard, presented in December 2008 at New York City’s oldest cabaret, the Duplex. She returned to the East Coast in early 2011, appearing with trumpet star Warren Vaché at Shanghai Jazz in New Jersey and as part of an all-star Mickey Leonard tribute at the Metropolitan Room in Manhattan. Back in New York in October 2011, she performed in a gala revue at Rose Hall, part of the New York Cabaret Convention. In 2012, she performed with the late pianist Richard Rodney Bennett at Manhattan’s famed St. Peter’s Church, part of the Midtown Music series.

Maud’s discography includes a duo recording with Arne Fogel, Let’s Not Be Sensible (2005) and her duo with husband Rick Carlson, Love’s Refrain, which topped many area “best of the year” lists for 2007. Following a successful Kickstarter campaign, Maud returned to New York in early 2013 to record the songs of Michael Leonard, holding the Minnesota release in spring 2013 and the New York release in September. Both her performance and recording have received top reviews, and Don’t Let a Good Thing Get Away was named one of the top local recordings of 2013 by the Star Tribune’s Critics Tally. Frequently appearing on club stages in duo, trio and with the Wolverines, Maud’s recent activities have included performing in the Jazz @St. Barneys concert series; gigs in New York, her debut in London in 2015, and appearing in multiple productions with Arne Fogel at area theaters. She’s often on stage at Parma 8200, is annually on stage with Fogel at Mancini’s during the Twin Cities Jazz Festival, and is currently working on a new recording of songs referenced by Maud Hart Lovelace in her beloved Betsy-Tacy books, about growing up in late 19th-early 20th century Mankato.

Bob Protzman (St Paul Pioneer Press) called Arne Fogel “…one of the Twin Cities’ most interesting people — a singer, musician, actor, composer, writer, producer, music-film-comedy and entertainment historian, collector and oral encyclopedia.”  A native of Des Monies, IA, Arne has sung on over 1500 jingles as well as composing and producing his own music for jingles and industrial presentations. An on-air personality on MPR, KLBB, and KBEM radio, he is also frequently seen on TV commercials, lends his voice to radio and TV spots, and has experience in local theater. Arne has channeled Sinatra and Crosby throughout clubs in the Twin Cities, was a regular at the Times and now at Hell’s Kitchen (usually with the Wolverines), performs monthly with the Acme Jazz Company, and released You Call It Madness on vinyl in 1989 and the acclaimed CD, Wrap Your Troubles in Dreams, in 2001. His duo with vocalist Maud Hixson led to their acclaimed Let’s Not Be Sensible (2005).

Arne’s exploits include the title role in Bing and the Andrews Sisters at the Bloomington Center for the Arts (2008); producing and hosting “The Bing Shift” on KBEM radio; producing/co-starring in a series of musical revues saluting Frank Sinatra, Hollywood, and the music of the 30s, 40s, and 50s at the Bloomington Center for the Arts; producing Minnesota Voices: Certain Standards for KBEM radio; co-producing and co-writing (3 songs) singer Nancy Harms second recording (in New York), Dreams in Apartments; co-producing Nancy’s upcoming release, Ellington at Night, and writing, co-producing, and hosting 12 new episodes of the series Bing’s Basement in Hollywood for Sirius XM Radio Network.

Arne and Maud, Bing and Rosemary

Arne Fogel’s interest in Bing Crosby has been evident throughout his career, particularly with his Bing Shift program on KBEM and various tributes in area clubs and theaters. But why a show about Crosby and Clooney? “It had occurred to Maud and I quite a long time ago to do a show on Crosby and Clooney,” he said, “First of all because it had a certain amount of personal significance for us, as the very first duet we ever performed together in public was a Crosby Clooney duet (which we later recorded) called “Love Won’t Let You Get Away.” …They were two extremely popular solo artists who were thoroughly comfortable with each other and who ‘locked in’ with each other’s way of singing so successfully. They were loaded with personality and a highly-charged sense of interpersonal interplay that made them seem witty, sophisticated, and hip in each other’s presence. And, they were always associated with top musical personnel such as writers Irving Berlin,  Cahn & Van Heusen, Livingston & Evans…. and arrangers Billy May and Buddy Cole…. Other factors too, such as the fact that I’m roughly the same number of years older than Maud that Bing was to Rosie; that I similarly started in the business many years before her, etc…. The parallels, despite Crosby & Clooney’s obviously legendary status, are intriguing.” Added Maud, “I’m motivated by the material, the Crosby-Clooney partnership, and their respective talents–I knew it would be an enriching enterprise.”

For Arne, this is not his first show about Clooney. “Her next-to-last show ever was here at Orchestra Hall, and I was her opening act [accompanied by Steve Pikal and Rick Carlson, who will be in the supporting band at the Capri]. Then of course there were Sue Tucker’s wonderful Rosemary Clooney tribute concerts earlier this decade, in which I appeared in a sort of ‘cameo’ role, performing some of the C&C duets with her.” Fogel further notes Clooney’s appeal:  “She was a terrific singer with great chops, a distinctive voice and larger-than-life personality, who could swing her ass off! Plus, when it seemed as though she was washed up professionally, she worked her way back into vogue with even greater depth and artistic commitment than she’d revealed the first time around. She reinvented herself in a way that was heroic and rare for a popular artist. Crosby played a large part in bringing her back into prominence, and we’ll touch on that as well.”

Maud has found personal inspiration in the music of Rosemary Clooney, noting that, “She is a rare singer, whose combination of talent, experience, taste and longevity provide a continual source of inspiration for me. Her work has endless layers, guaranteeing new discoveries, even after years of study. I’ve also found this with Judy Garland, Doris Day, Peggy Lee, and others. I really value new insights about artists I’ve already absorbed a lot from… I had some familiarity with much of the material, and had performed several of the songs, but hadn’t spent much time studying these arrangements and her performances until now.”

For Maud, the biggest challenge of the show has been “to internalize and then interpret someone else’s work, [which] should also be the biggest reward. It’s a chance to fashion something out of this knowledge and discovery that expresses my own sensibility, alongside a matchless group of collaborators.” Adds Arne, the challenge has been finding “time for writing, organizing, rehearsing, etc… We are all, thank God, busy people, and it’s tough to get these kinds of projects together in a timely fashion, and then put it together in a way that you hope will attract people to the theater and then entertain them once they’re in there.” But the rewards are many. “Working with Maud and Rick is such a pleasurable experience, always. Such total pros who love the music as much as I do, and who pull their weight so reliably. Maud Hixson is more than just a superlative singer; she possesses the soul of a passionate musicologist, thoroughly devoted to song, its context and expression. I fell in love with that voice the first moment I heard it, and I’ve been learning from her ever since. How can you not love working with that?”

Among the music planned for the show, we can expect to hear songs from their major albums (Fancy Meeting You Here and That Travellin’ Two-Beat) such as “I Can’t Get Started”, “You Came a Long Way From St. Louis”, “I Get Ideas,” etc.; songs from their film White Christmas, and songs from their years together as a radio team, such as “Two to Tango” and “As Time Goes By.” “We cover just about every aspect of their teaming,” notes Arne. 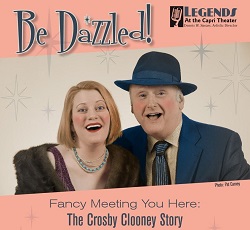 And it’s the aspects of the teaming of Arne Fogel and Maud Hixson that make this production of show worth repeating. Catch it again or for the first time this weekend at the Capri.