Skip to content
Home>Twin Cities>Gypsy in Her Soul — Connie Evingson Swings at the Jungle Theater, April 17 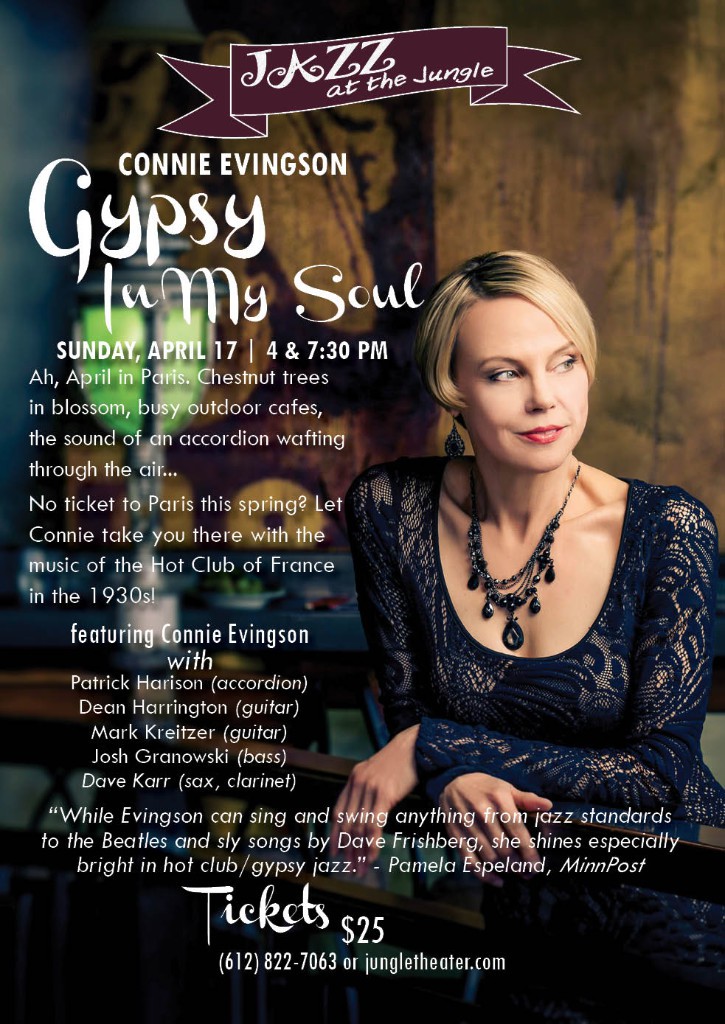 She’s sung it all, from Ella to Ringo, but Connie Evingson is perhaps best known for Django– the music of Django Reinhardt and the swinging “gypsy jazz” styles of the French hot clubs of the 1930s. Connie brings “Gypsy in My Soul” to her Jazz at the Jungle series this Sunday, April 17, with a band that knows this music well — Patrick Harison (accordion), Dean Harrington and Mark Kreitzer (guitars), Josh Granowski (bass), and special guest and frequent cohort, Dave Karr (sax and clarinet). There are two shows, 4 pm and 7:30 pm.

A native of Hibbing in northern Minnesota’s Iron Range, Connie Evingson grew up listening to her father’s records of Duke Ellington, Count Basie, Ella Fitzgerald, Sarah Vaughan, Joe Williams, Tony Bennett, Lambert, Hendricks and Ross, and later Peggy Lee and Shirley Horn. Influenced by these early muses as well as the musical icons of her generation (the Beatles, Joni Mitchell, Bob Dylan, Sting, Bonnie Raitt), Connie’s eclectic tastes were soon evident, from her first club gig at the old Night Train in St. Paul to a brief stint with the Minnesota Vocal Jazz Ensemble before she joined Moore By Four in 1986. With Moore by Four, Connie performed and toured the world throughout the late 80s and 90s, often opening for the biggest stars in music. In the past decade, her career as a soloist has included nine CDs for Minnehaha Music, most releases charting on Jazzweek’s Top 50 for extended periods. Long regarded as among the top echelon of jazz artists in the Midwest, recipient of two McKnight Artist Fellowships, and nominated as Jazz Week’s Vocalist of the Year in 2005, Connie’s back-to-back recordings of hot club swing (Gypsy in My Soul, Stockholm Sweetnin’) brought renewed attention to the genre and led to performances at Jazz Alley in Seattle, Blues Alley in Washington, DC and appearances in Europe.

But Connie Evingson has never been one to rest on the laurels of a popular style, and even while Gypsy in My Soul was climbing the charts in 2005, she was delving into a new project, the songs of Dave Frishberg. Little Did I Dream (2008) was arguably one of Connie’s most successful recordings, gaining accolades from local and national press. “Little did I dream that one day I’d get to record an entire album of his songs—with him at the piano,” said Connie. Connie’s 2012 Sweet Happy Life showcased her “framing and saluting [Norman] Gimbel’s work with her delightful voice, superb diction, timing and phrasing” (All About Jazz). In addition to curating Jazz at the Jungle productions over the past five years and heading a monthly Jazz in the Lounge gig at the Minneapolis Woman’s Club, Connie appears regularly at the Dakota, Vieux Carré, and Crooners Lounge, and, in June 2013, made her Jazz at Lincoln Center debut in Michael Feinstein’s “Swinging With the Big Bands,” featuring Wynton Marsalis. Connie’s recent projects include a return to hot club repertoire with All The Cats Join In,  recorded with the John Jorgenson Quartet and released at the Dakota in fall 2014, as well an ongoing series of productions at the Jungle Theater with pianist Jon Weber. Connie received an Artist Initiative Grant for 2015 from the Minnesota State Arts Board, which supported concerts at the American Swedish Institute.

One of the real Elders of Twin Cities jazz at 86, special guest Dave Karr can still blow just about any reed, from bari and tenor sax to clarinet and flute, and he still contributes those reeds to such ensembles as the JazzMN Orchestra, Pete Whitman X-Tet, his Dave Karr Quartet, and a variety of projects with vocalist Connie Evingson. A native Canadian who emigrated to England in early childhood before landing in New York City, Dave got hooked on jazz by listening to some of the great jazz legends, including Charlie Parker and Dizzy Gillespie. Moving to the Twin Cities in his twenties, Karr has been a fixture on the Twin Cities jazz scene for more than 60 years, composing and producing music for radio and TV since 1970, and performing with numerous bands, symphony orchestras, Broadway shows, and recording sessions. Among highlights of the last few years, Dave has performed with vocalist Connie Evingson in her Jazz in the Lounge series at the Minneapolis Woman’s Club and her Jazz at the Jungle series, and in February made his quartet debut in the Dunsmore Room at Crooners. where he returns on May 31.

Gypsy Jazz at the Jungle. In addition to her three albums of hot club music, Connie’s resumé includes performances with the Twin Cities Hot Club, Parisota Hot Club, John Jorgenson Quartet and Clearwater Hot Club in Minnesota venues, performances at Seattle’s Jazz Alley with Pearl Django, recording and performing with the Hot Club of Sweden, and appearances with the Hot Club of Detroit at the Dakota in Minneapolis and in Detroit, Cleveland and New York City. Her most recent hot club cohorts are members of the yet-to-be-named quartet of Patrick Harison, Dean Harrington, Mike Cramer and Josh Granowski. Mark Kretizer fills in for Cramer at The Jungle.

Pretend this is “April in Paris” on Sunday, April 17, when The Jungle Theater is transformed into a Parisian café.

Only a few tickets remain for the 4 pm show, best seating for 7:30 pm. The Jungle Theater is located at 2951 Lyndale Ave South in Minneapolis. Tickets $25 at http://www.jungletheater.com/junglejazz/. Shows on the 2016 Jazz at the Jungle season include June 19, August 28 and November 6 (TBA).